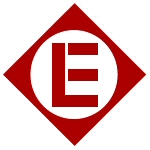 The Erie-Lackawanna Railroad was formed by the merger of the Erie Railroad with the Delaware, Lackawanna & Western on October 17, 1960. (A minor renaming occurred in late 1963 when the hyphen was dropped.) The new railroad took after its parent Erie; the largest amount of Lackawanna influence seemed to be paint. Both of EL's parents entered the merger after a couple of years of deficit operations, and EL continued their record, except for 1965 and 1966.

EL quickly consolidated its passenger services, with most trains following the ex-Lackawanna route east of Binghamton and the ex-Erie route west. Long-distance passenger trains were gradually cut back during the 1960s, and the last Hoboken-Chicago train was discontinued in 1970, leaving EL with a single daily commuter round trip between Cleveland and Youngstown and its extensive New Jersey commuter services. In 1967 the state of New Jersey began subsidizing the service and in 1970 began to acquire new cars and locomotives for the trains on the ex-Erie routes and the non-electrified Lackawanna lines (the Lackawanna electric cars would continue running until 1984). The Cleveland-Youngstown train lasted until 1977.

Hurricane Agnes hit the East on June 22, 1972. After estimating that damage to the railroad, principally between Binghamton and Salamanca, N. Y., amounted to $9.2 million, EL filed for bankruptcy on June 26, 1972. During the reorganization of the eastern railroads, it was thought that EL might be able to reorganize on its own, and there was a proposal by Chessie System to buy a portion of the EL. However, Chessie canceled the agreement and EL asked to be included in Conrail.

Consolidated Rail Corporation took over EL's operations on April 1, 1976. Conrail's map excluded most of the former Erie main line west of Marion, Ohio. The Erie Western was formed to operate the 152 miles from Decatur to Hammond, Indiana, with subsidy from the state of Indiana. The road operated for a brief period in 1978 and 1979, but the subsidy was withdrawn and on-line traffic wasn't sufficient to support the operation. Other shortline operators have taken over various parts of EL with more success; they are listed in the entries for the Erie and the Lackawanna. As an odd valedictory for EL, parent Norfolk & Western donated its 1,000 shares of Erie Lackawanna stock and the corporate records to the University of Virginia in 1983.

The Lackawanna’s history, like that of many Eastern railroads, is one of mergers, consolidations, and leases. The oldest portion was the Cayuga & Susquehanna Railroad, completed in 1834 between Owego and Ithaca, New York. Lackawanna’s corporate structure dates from the incorporation of the Liggett’s Gap Railroad in 1849. That line was built north from Scranton, Pennsylvania, to the Susquehanna River and a connection with the Erie at Great Bend, Pa. It was renamed the Lackawanna & Western in 1851, and it opened later that year.

Also incorporated in 1849 was the Delaware & Cobb’s Gap Railroad to build a line from the Delaware River over the Pocono Mountains to Cobb’s Gap, near Scranton. It was consolidated with the Lackawanna & Western in 1853 to form the Delaware, Lackawanna & Western Railroad. It was completed in 1856 and almost immediately made a connection with the Central Railroad of New Jersey at Hampton, N. J., through the Warren Railroad, which was leased by the DL&W in 1857.

The Morris & Essex Railroad was chartered in 1835 to construct a line from Morristown, N. J., to New York Harbor. By 1860 it extended west to the Delaware River at Phillipsburg, N. J. The Lackawanna leased it in 1869 to avoid having to use the Central of New Jersey. Also in 1869 the Lackawanna bought the Syracuse, Binghamton & New York Railroad, leased the Oswego & Syracuse, and incorporated the Valley Railroad to build a connection from Great Bend to Binghamton to avoid having to use Erie tracks. In 1870 DL&W leased the Utica, Chenango & Susquehanna Valley and the Greene Railroad. Thus in the space of a couple of years the Lackawanna grew to extend from tidewater to Utica, Syracuse, and Lake Ontario.

On March 15, 1876, the Lackawanna converted its lines from 6-foot gauge (chosen because of the Liggett’s Gap Railroad’s connection with the Erie) to standard gauge. That year also marked the beginning of a short period of financial difficulty – not enough to cause reorganization, receivership, or bankruptcy, but enough for suspension of dividend payments. In 1880 Jay Gould began buying Lackawanna stock. His empire reached as far east as Buffalo, east end of the Wabash, and he saw that the Lackawanna would be an ideal route to New York if the gap between Binghamton and Buffalo could be closed. Lackawanna management prevented Gould from acquiring control of the road, but Gould’s proposed extension to Buffalo was built: The New York, Lackawanna & Western was incorporated in 1880 and leased to the DL&W in 1882, changing the DL&W from a regional railroad to a New York-Buffalo trunk line.

The 1880s brought diversification in Lackawanna’s traffic. Anthracite, much of it from railroad-owned mines, had been the reason for the Lackawanna’s existence. During the 1880s the coal traffic increased one-third, but Lackawanna’s general merchandise traffic increased five times that amount. In addition the DL&W was rapidly becoming a commuter carrier at its east end.

William H. Truesdale became president of the Lackawanna in 1899 and embarked on a rebuilding and upgrading program. The two major items were a 28-mile cutoff straight across western New Jersey between Slateford and Port Morris that bypassed some 40 miles of slow, curvy, hilly track, and a new line north of Scranton. Both new lines were characterized by massive cuts and fills and graceful reinforced-concrete viaducts – Tunkhannock, Paulins Kill, Martins Creek, and Kingsley. Lackawanna’s suburban territory came in for track elevation, grade-crossing elimination, and new stations, all as prelude to the 1930 electrification of lines to Dover, Gladstone, and Montclair.

In 1949 Phoebe Snow returned to the Lackawanna. In the early part of the century she had been Lackawanna’s symbol. Hers was the gown that stayed white from morn till night upon the Road of Anthracite -anthracite was much cleaner-burning than the bituminous coal used by other roads. Phoebe Snow’s return to the road was in the form of a diesel powered maroon and gray streamliner for daytime service between Hoboken and Buffalo.

In 1954 the Lackawanna and parallel rival Erie began to explore the idea of cooperation. The first results were the elimination of duplicate freight facilities at Binghamton and Elmira, and then in 1956 and 1957 the Erie moved its passenger trains from its old Jersey City terminal to Lackawanna’s somewhat newer one at Hoboken. The two roads eliminated some duplicate track in western New York. The discussions of cooperation turned into merger talks, at first including the Delaware & Hudson.

Meanwhile DL&W’s financial situation took a turn for the worse. Hurricanes in 1955 damaged the Lackawanna’s line through the Poconos; the cost of repairs no doubt contributed to deficits, which occurred in 1958 and 1959. DL&W threatened to discontinue all suburban passenger service if the state of New Jersey would not alleviate the losses and rectify the tax situation. The state responded with a minimal subsidy.

When the Erie Canal was built across upstate New York between Albany and Buffalo, DeWitt Clinton, governor of New York, promised the people of the Southern Tier of the state some kind of avenue of commerce by way of appeasement. William Redfield proposed a direct route from the mouth of the Hudson to the Great Lakes, but it was Eleazar Lord who was instrumental in the chartering of the New York & Erie Railroad by the New York state legislature in April 1832. Among the conditions of the charter were that the railroad lie wholly within New York and that it not connect with any railroads in New Jersey or Pennsylvania without permission of the legislature. A track gauge of 6 feet ensured that even if it did connect, its cars and locomotives wouldn’t stray onto foreign rails. The terminals were fixed: The town of Dunkirk offered land for a terminal on Lake Erie, and Lord lived at Piermont, on the Hudson River just north of the New Jersey state line. The New York & Harlem was willing to extend a line north to a point opposite Piermont, which would have given the New York & Erie an entrance to Manhattan, but the new road refused the offer.

The surveyed route included two detours into Pennsylvania, one because the Delaware & Hudson Canal had already occupied the New York side of the Delaware River above Port Jervis, and the other to follow the Susquehanna River to maintain an easy grade.

Ground was broken on November 7, 1835, near Deposit, N. Y. Shortly afterwards fire destroyed much of New York and wiped out the fortunes of many of the road’s supporters; then a business panic struck the nation.

Construction got under way in 1838, and the first train ran in 1841. Much of the railroad was built on low trestlework rather than directly on the ground; the resulting construction and maintenance costs drove the railroad into bankruptcy soon after it opened. Construction continued, however. The line that had been built east a few miles from Dunkirk was taken up to provide rails for the extension from Goshen, N. Y., to Middletown. Standard-gauging the line was proposed while it would still be relatively inexpensive to do so, but the road chose to stay with its broad gauge. The New York & Erie reached Port Jervis, N. Y., on the Delaware River 74 miles from Piermont, on December 31, 1847; just a year later it was into Binghamton. The whole road from Piermont to Dunkirk was opened in May 1851 with an inspection trip for dignitaries from U. S. President Millard Fillmore and Secretary of State Daniel Webster on down and the customary eating, drinking, and speechifying.